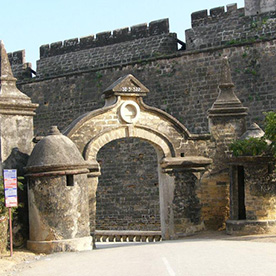 Diu is a town in Diu district in the union territory of Daman and Diu, India. The town of Diu lies at the eastern end of Diu Island, and is known for its fortress and old Portuguese Cathedral. It is also a fishing town.

It is the tenth least populated district of India. Diu has been selected as one of the hundred Indian cities to be developed as a smart city under PM Narendra Modi's flagship Smart Cities Mission.

With no tall buildings except the fort, Diu has a characteristically low skyline. Old Diu is known for its Portuguese architecture. Diu Fort was built in 1535 and maintained an active garrison until 1960. There are three Portuguese Baroque churches, with St. Paul’s Church, completed in 1610, being the only one still in use for its original purpose. The Church of St. Francis of Assisi, the first church built in Diu, in 1593, is now used as a hospital. St. Thomas Church is currently used as a museum.

An ancient Lord Shiva's Temple is located on the Gangeswar coast. Naida Caves are located near Jalandhar Beach. One of the most scenic places in Diu is the INS Khukri memorial which is located near the Jallandhar Beach. The place is known for its open amphitheatre and breaktaking sunset shots.

Local transport is available from Una (Gujarat). Air India Regional and Jet Airways service the island from the mainland, landing at Diu Airport. The nearby Nagoa beach and offshore lighthouse are popular tourist destinations, and the coast is a popular recreational area for parasailing, boating, and jet skiing. There are several hotels and resorts and there is a growing hotel and leisure industry. Unlike Gujarat, alcohol is legal in Diu.

Many people confuse Diu with Daman. Although people refer to them together, they are different places (approximately 650 km from each other).